While the park isn’t officially open this early, they do allow photographers in prior to sunrise. I really have no idea of this place as it is pitch black when I got here, a few hours early as usual. I am unsure where the flight deck is, so I waited at the crossroads to see other activity. I knew someone would be arriving soon and I would just follow their lead to get to the correct location. It didn’t take long for headlights to start lighting up the roadside. A few cars headed to the left, so that’s the way I went too.

As this is my first time here, I watched where everyone else set up. Only a handful of the 30+ people stood on the flight deck. The majority are all standing at the edge of the ponds in any opening they could find. It’s a better perspective of the birds and the backdrop. You can barely see their silhouettes in the water, though you can hear a little noise so you know they are there. I asked a couple of locals if they had any recommendations for the big event. I got a couple of tips, and a bunch of ‘Oh… it’s your first time’ comments, but nothing could have prepared me for what was about to take place.

You hear it before you see it!

The cackling of a thousand geese starts all at once. They are waking up, and letting the world know it. The sun is starting to rise, and the mountain backdrop is beginning to take shape. I start clicking my camera remote, and try to keep my hands in my pockets as much as I can in a feeble attempt to try and keep them warm. The temperature is 11′ degrees. Brrrr……!!!

And just like that…. you hear a loud whooosh and they all take flight at the same time. I really couldn’t focus as I was so taken aback. The sound was deafening and the whole experience was surreal. They circled back once, or twice… and then they were gone. From the time they wake, till take off isn’t very long at all. It happens so fast, by the time you realize what just happened, it’s over.

I was informed that I should leave here and head down to the south pond that is on the road in. That’s where they will likely land, and the Sandhill cranes are there and should be waking up soon. Sounds good to me!

There are a lot of people at south pond already. There are rows of photographers and tripods waiting for the cranes to take off. This is a regular scene here during migration. They even have a handicapped spot for wheelchairs.

Photographers lined up to get images of Sandhill cranes at south pond, Bosque Del Apache 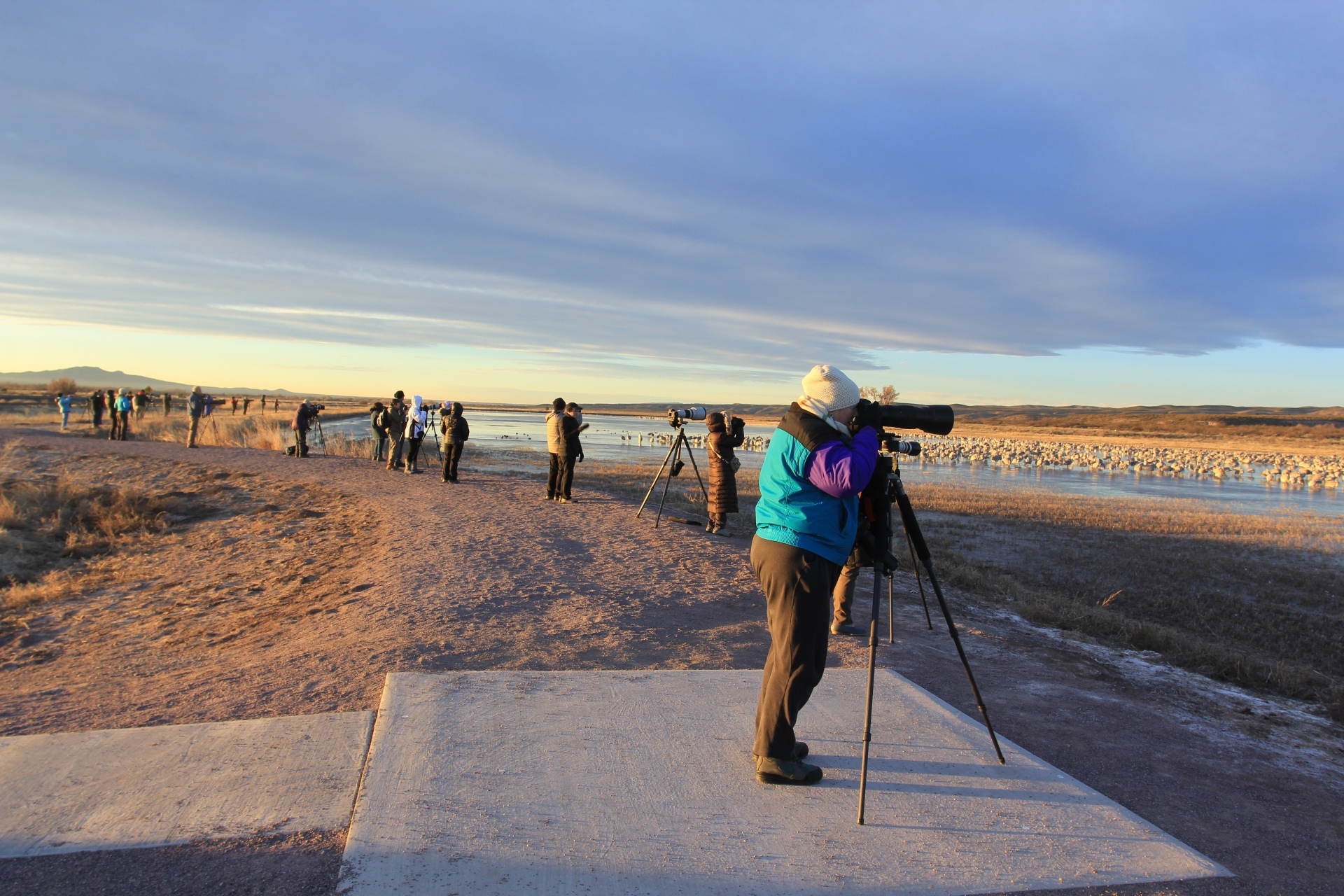 BOSQUE FOR THE HANDICAPPED - at Bosque del Apache

Unlike the geese who take off all at the same time, the cranes are more thoughtful about their take off. You can watch how they contemplate the whole scenario, before they actually decide to do it. And when they finally decide it’s time, they lean their heads forward…. then think about it some more. They may do this a few times before they actually take off. Almost like they are getting their nerve up, and letting others do it first. When it finally happens, they do it alone, or in very small groups of two or three. There is a thousand birds here, so this could take a long while. Here they go…

After a few hours, I drove back to where I started this morning. The sun has fully risen, so this time when entering park, I can actually see it. While the geese were gone, there were plenty of other species of ducks and birds near the flight deck.

Like Bernardo Wildlife Area, this was a 12 mile one-way driving wildlife loop, though with a two lane road. As it was winter, and not very populated this time of year, you could easily pull to the side and not block traffic when you spot wildlife and not be hurried. This was extremely beneficial as I stopped a lot!

I spent the next few hours exploring and getting acquainted with the layout. I plan on being here a few days. The parks is sectioned off in two loops: the farm loop (right at crossroad), and the marsh loop (straight from crossroad) which comes around and ends at flight deck (left at crossroad). I started off on marsh loop basically because I was trying to getting a better angle of two Bald Eagles sitting in a dead tree in the middle of the water. This was a great choice! This whole loop was loaded with wildlife activity and action from the beginning to the end. They have few other loops openings, and at certain times of the year they may alternate. But I believe these two are the year round loops.

The farm loop seemed to have less action, though it was much later in the day by the time I got there, and most wildlife is more active in mornings and dusk. But it did have a few places to hike and stretch your legs which I really needed after the the marsh loop. One can sit entirely to long!

When the sun was getting close, I headed back down to the south pond to watch the cranes come to bed. They would come in single, or small groups of up to 10 or so. The way the sun set, they call it the golden hour as the sky would light up, and the cranes would be silhouetted as they landed. Remarkable!!

The perfect ending to the day

It's too quiet around here. Your words matter! Cancel reply

PHOTO OF THE WEEK

COPYRIGHT NOTICE: ALL ‘original content, design, creations, and images’  on this website are protected by the U.S. and international copyright laws, all rights reserved. They may not be copied, reproduced, manipulated, or used in any way, without written permission of ©jenniferrobin.gallery.

The purchase of any of my prints do not transfer reproduction rights.  No watermark, with respect to signed copies, shall appear on any finished prints. They are strictly utilized for security on this site.

‘Wild horse advocates’ have permission to ‘link’ to this wild horse data content for personal use (educational and learning purposes), for sharing links, to use for sharing with legislature, politicians, friends, and family in an effort to save the wild horses across this nation.  This website, or content within may not be reproduced or duplicated for other personal, or business ventures without  consent.

‘Wild horse opponents, or their lawyers’ do not have any permissions allowed. You may not duplicate, or manipulate any section of this website, nor use any of this website, design, images, or content, with exception to firsthand viewing, social media sharing, and general learning. July 20,2021